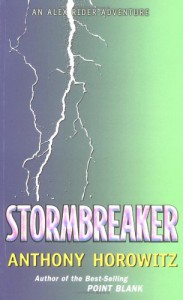 Now, this book was originally meant to be a Flashback Friday post as this isn't the first (or second, or third) time I've read this book; but I missed the deadline. Alex Rider series is a series that I read when I was a young girl in elementary/middle school. It was a book that was fast paced and was dived into the world I've only saw on television at that point.

Originally published in 2000, Stormbreaker is the debut novel into the Alex Rider series, a series that would eventually stretch to be 10 books all pertaining to a 14-year-old British boy named Alex Rider (surprise). In Stormbreaker, Alex's uncle had recently died in a "car accident" and Alex finds himself orphaned (as his parents died when he was a young boy, hence, why he was being raised with his uncle). Curious -- maybe a bit too much -- Alex digs into his Uncle's death only to find that dear old Uncle Ian didn't die in a car accident. MI6 -- British's CIA -- has been watching Alex and find his curiosity useful.

Yep, it's a boy-turned-spy novel.

Now the reason why I picked this book up again isn't just for the nostalgia (although, that is a big part of it). I hate leaving series unfinished. Its one on my pet peeves both in writing and reading. So, when I found out that the Alex Rider series has been completed I had to know the ending of this series that captivated me as a girl. So, I found my old copy of Stormbreaker and settled in to read.

With that being said, I will be reading the other 9 books. I will try to keep those on the Friday schedule though.

This book, while geared towards the younger crowd, was an enjoyable read even though I'm not a 22 year old woman. It kept me entertained. I still laughed at Alex's wit and humor. I found myself wanting to continue reading even though I knew the rough plot line.

Overall, I give this book a 4 out of 5. Its a good read; but, has it faults in some lucky moments that were a bit too lucky.